The Eva Mayr-Stihl Foundation promotes young scientists at the Faculty of Engineering of the Albert-Ludwigs-University Freiburg - in particular the Institute for Sustainable Technical Systems (INATECH). The Eva-Mayr-Stihl-Prize and the Robert-Mayr-Prize are awarded to scientists at the beginning of their careers for outstanding achievements. The two awards were handed over by the Rector of the University of Freiburg, Prof. Dr. Hans-Jochen Schiewer, together with the founders whom the prizes had been named after in the opening ceremony of the Academic Year 2018/19 on October 17. He thanked them with the words: "It is nice to see that you are especially concerned about the work of our young academics. Such an award at an early stage of an academic career can boost the person’s development. "

Eva Mayr-Stihl handed over the prize named after her to Dr. Ing. Matthias Breitwieser for the development of a new production method for membrane electrode assemblies for polymer electrolyte fuel cells. His research and findings contribute significantly to improving the performance and durability of fuel cells. Mayr-Stihl emphasized: "It is important to us not only to support INATECH and the Chair of Intelligent Networks, but also to promote promising young researchers and their efforts. Because they decisively shape the future of technological development. " Claudia Schilling received the Robert Mayr Prize from the Honorary Senator of the University of Freiburg, Robert Mayr, for her work on improving the efficiency of solar cells. 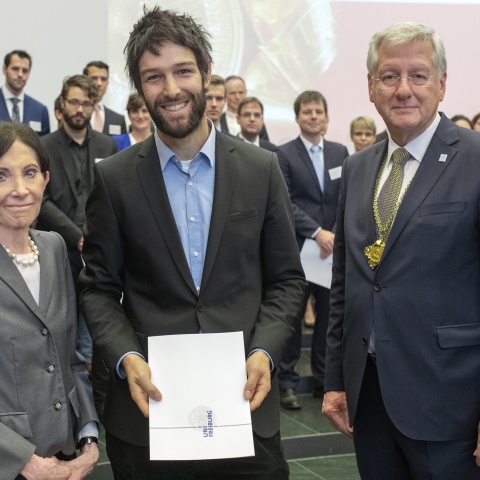 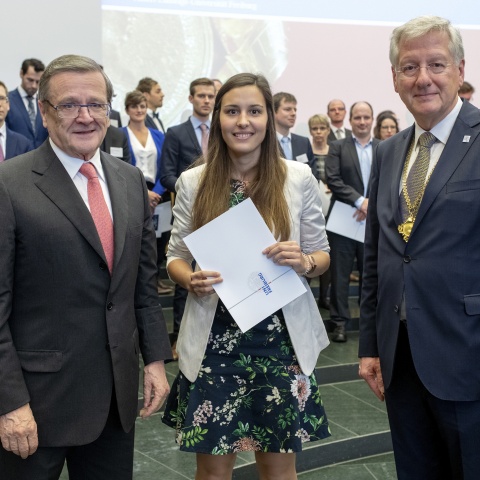