Generous donation to the Volksbund

More than eighty years after the end of the Second World War, well over a million war dead are still missing – in Eastern Europe alone. The German War Graves Commission is still looking for and finding dead people from the wars, informing the relatives and ensuring a dignified final rest. The private association works on behalf of the federal government. According to international law, the dead of war have a permanent right of rest.

The Volksbund's reburial service is now receiving outstanding technical support. The Eva Mayr-Stihl Foundation donates a reburial vehicle. Arne Schrader, Head of the War Graves Service at the Volksbund, is grateful for this. “With this special vehicle, we are flexible and ready to go almost anywhere. We can use it to bring the necessary equipment directly to almost any location – whether in the Croatian karst regions, the Alps, the Tatras or in the Romanian forest areas.” The working conditions are often difficult, so the requirements were high: the vehicle had to be all-terrain and provide transport capacity for four people, material as well as equipment and be usable with a German category B driving license. With the all-terrain trailer that was also ordered, it is to be used primarily as a standby vehicle for emergency excavations and soundings in difficult terrain.

A personal concern for Robert Mayr

Wolfgang Schneiderhan, President of the Volksbund, will be present at the handover: “I am particularly pleased that the Eva Mayr-Stihl Foundation as an organization has now also become a member of the Volksbund. That shows me the bond and appreciation for our work.” Robert Mayr, Chairman of the board of the Eva Mayr-Stihl Foundation, explains his personal interest: “My father died in 1944 as a prisoner of war in Russia, his grave is unknown. I have visited war cemeteries in Kharkiv, Stalingrad and Krasnodar and was deeply moved because they impressively document the senselessness of wars. I was impressed by how excellently cared for the graves were and what touching places for remembrance were created there.”

Volksbund Deutsche Kriegsgräberfürsorge e.V.
The Volksbund Deutsche Kriegsgräberfürsorge e. V. is a humanitarian organization. On behalf of the federal government, it devotes itself to the task of registering, preserving and caring for the graves of German war dead abroad. Today the organization looks after over 830 war cemeteries in 46 countries with around 2.8 million war dead.

It is still looking for and finding the dead of the wars, informing the relatives and giving them a place for their mourning and remembrance at the war cemeteries. From this work, the Volksbund draws its mandate to admonish for peace. 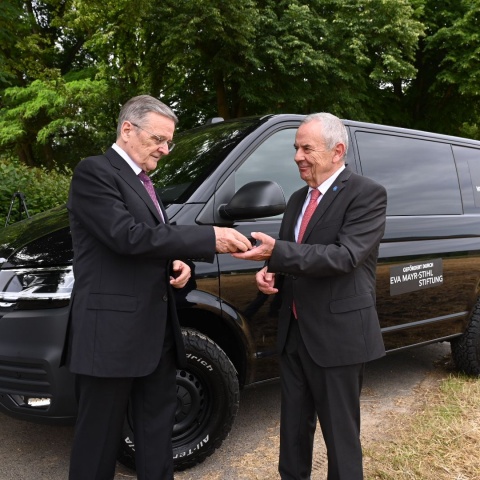