Twice a million euros: Eva Mayr-Stihl Foundation funds research at the Institute for Sustainable Technical Systems of the University of Freiburg

One million euros for the newly established professorship for Intelligent Networks, another million for research and teaching projects throughout the institute: The Eva Mayr-Stihl Foundation, founded by Eva Mayr-Stihl and Robert Mayr, supports the Institute for Sustainable Technical Systems (INATECH ) over the next ten years to promote the development of new engineering competencies in the field of sustainability. "Eva Mayr-Stihl and Robert Mayr have been among the greatest supporters and advocates of the University of Freiburg for many years", says Rector Prof. Dr. med. Hans-Jochen Schiewer. "We are extremely grateful, glad and proud that we have now also been able to convince their foundation, which has so far been particularly committed to our forestry sciences, to building our major project in sustainability research."

The University of Freiburg founded INATECH in 2015 at the Faculty of Engineering. At the same time, it is the engineering core of the Sustainability Center, which the University operates in conjunction with the five Freiburg Fraunhofer Institutes. "We supported the establishment of the Institute for Sustainable Technical Systems at the University of Freiburg right from the beginning and also welcomed the participation of the Freiburg Fraunhofer Institutes," says Eva Mayr-Stihl. "We look forward to working together on the new INATECH project at Freiburg's Albert-Ludwigs-Universität - and we wish and expect much success for the upcoming implementation."

"The foundation funds will give INATECH valuable opportunities for research and teaching on the core issues such as material cycles and system-level solutions, which are so important for the success of sustainable development steps," emphasizes Prof. Dr. med. Stefan Hiermaier, founding director of INATECH. "In particular, the topics of resource conservation and new forms of mobility will be efficiently promoted." The future holder of the professorship for Intelligent Networks is Prof. Dr. med. Melanie Zeilinger, who will be moving from the Swiss Federal Institute of Technology (ETH) Zurich / Switzerland to the University of Freiburg on October 1, 2018. Her research focuses on secure algorithms for autonomous systems that learn and interact to increase their performance. Energy systems, for example, can save resources by learning the profile of their individual user and adapting it to other systems via the network in order to optimally compensate for fluctuations. "In order to be efficient and sustainable, the technology of tomorrow has to be networked and adaptable to a much higher degree than it is today, but it has to be absolutely reliable," says Zeilinger. "The professorship enables us to research fundamental questions and to put them into practice in the excellent framework of INATECH."

Since 1995, the Eva Mayr-Stihl Foundation supports science and research at the University of Freiburg, with a volume of 3.3 million euros. Outstanding examples are the support of the professorship for forest and forestry history, which received one million euros from 2005 to 2015, and the funding since 2016 of a project of the professorship for forest and environmental policy with 500,000 euros. In addition, the foundation contributed 150,000 euros to the 550th anniversary of the university in 2007 and, since 2014, has co-financed 16 Germany scholarships for students with a total of just under 30,000 euros. The University of Freiburg has already honored Robert Mayr as a representative and member of the board of the Eva Mayr-Stihl Foundation in 2005 as honorary senator. 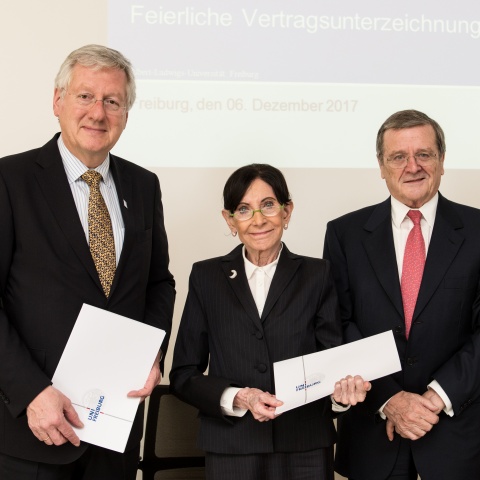